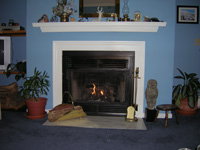 Fireplace & Chimney Dampers Fireplace doors and chimney dampers should be tightly closed when the fire is completely out. The maintenance staff occasionally finds them open. It should also be noted that fireplace usage in sub-zero weather, especially if accompanied by high winds, is more likely to contribute to heat loss than gain, especially as the fire dies down.

How to Start a Fire You will need the following materials to build and maintain a good wood fire: 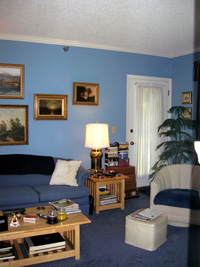 Modern fireplaces are constructed so that combustible air enters the firebox through a narrow strip above and behind the glass panel. This “air wash” flows down across the glass to the front of the fire because it is cooler, denser and heavier than the combustion gases. Most stoves without a glass air wash system will have an air inlet near the bottom of the firebox, usually just inside the loading door. This is the location where you want to concentrate the paper and kindling and light the fire so that it gets plenty of air.

You can build a conventional fire by starting with paper and putting kindling on it, as described below, or you can build a top-down fire.

The goal when lighting a wood fire is to use only one match and to achieve rapid ignition of the load without fussing or waiting for it to catch. After practicing this procedure a few times, you might be surprised at how quickly you can establish a bright, hot fire. When the flames from the kindling load just begin to subside, add several small pieces of firewood by placing them on and behind the burning kindling.

Disposal of Materials Tenants must be especially cautious in disposing of ashes, embers or smoldering logs. Embers and/or smoldering logs should be left in fireplace until cold. Fireplace waste should never be placed into the dumpsters or on decks. Steel ash cans are provided for this and are located beside each dumpster.

Closing Down the Fireplace  After the fire is completely out and the ashes are properly disposed of, make sure the damper is FULLY closed. If a draft is present, this an indication the damper is still open. Make sure to push firmly to ensure the damper has closed.